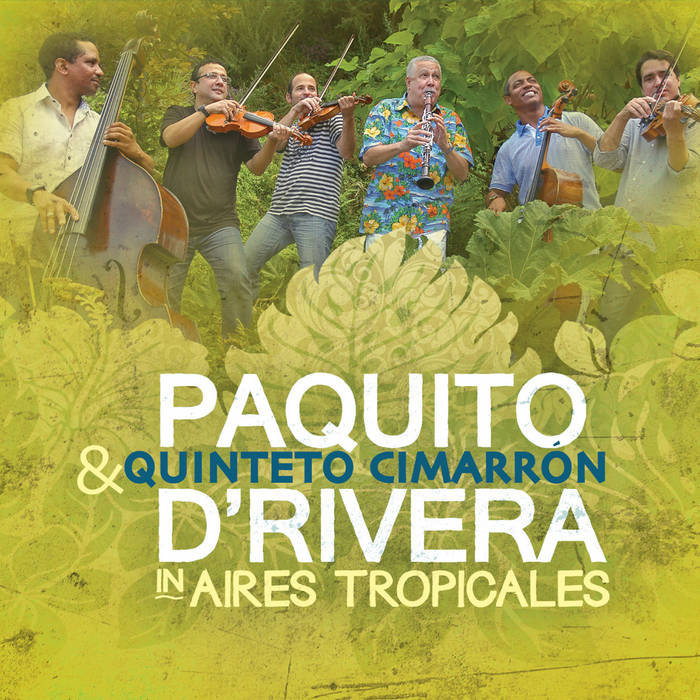 Deidre House A kind of showcase of various Cuban composers' works arranged for a string quintet plus D'Rivera on clarinet and sax. Starts off with a five part suite composed by D'Rivera that I would describe as Latin chamber jazz. The rest are from various composers and time periods and thus range from chamber music to Cuban folk styles and sometimes traditional-jazzy sounds. The info on the album page is extremely detailed. Favorite track: Alborada y Son.

Cuba’s musical legacy is one of tremendous variety. The tradition of classical music was introduced early and has been nurtured for generations in the country’s many highly regarded conservatories. The music of the people, namely the son, danzón and habanera, are still popular and played routinely. Jazz was a late addition to the fray, but has remained popular with many Cuban musicians.

It was such a blend that fostered the development of the great Cuban woodwind specialist Paquito D’Rivera. Initially a classical music prodigy, D’Rivera developed a love for both the native music of Cuba and that which was brought in from the United States, especially jazz. Since leaving Cuba, he has become one of the most prominent clarinetists and saxophonists in the world.

D’Rivera’s proficiency in all genres has made it possible for him to collaborate in musical projects of all types. It was at a symposium in Galicia, Spain that D’Rivera was introduced to Quinteto Cimarrón, a classical string quintet made up of Cubans based in the north of Spain. Their connection was immediate and led to their collaboration on Aires Tropicales, a collection of originals from members of the ensemble and arrangements of music by Cuban composers, both classic and contemporary.

Quinteto Cimarrón has been a working ensemble since 2008. The members all have extensive training and backgrounds in classical music from their childhood days in Cuba to their transition to ensembles in Spain, where most have lived since the late 1990s or early 2000s. The ensemble consists of violinists Eduardo Coma and Lázaro W. González Pena, violist Raymond Arteaga, cellist Luis Caballero and contrabassist Oscar Rodríguez.

For the recording, D’Rivera brought his “Aires Tropicales”, which he had originally composed for a wind quintet. His friend and leuthier Luis Rossi had arranged the pieces for clarinet and string quartet. Violist Eduardo Cana added a contrabass part that was recorded here along with a variety of pieces by Cuban composers, ranging from some dating from the early 20th Century to contemporary composers active today.

The recording begins with D’Rivera’s “Aires Tropicales,” a five-part suite highlighting styles popular in Cuba since the 18th Century. “Alborada y Son” begins with a lilting morning serenade, which ebbs and flows in a dancing rhythm. The waltzing “Wapango” is followed by the recognizable national rhythm of Cuba in “Habanera,” but here in a mournful tone. The choir-like arrangement of “Afro” is augmented by the dexterous rhythm of the ensemble, while the arrangement of “Contradanza” is a striking blend of Cuban rhythm and classical form.

The program continues with “Martica” by bassist/composer Orestes Urfé (1922-1990), a haunting piece led by bassist Rodríguez and featuring an expressive cadenza by D’Rivera. “Tamborichelo III: La Cubana” is by contemporary composer Eduardo Cana and is a virtuosic showcase for the string quintet. Famed trova musician and composer Manuel Corona’s (b. 1880-1950) romantic “Longina” leads into Spanish based pianist Ivan “Melón” Lewis’s “Notas De La Habana,” a perfect piece of nostalgic writing.

Igmar Alderete (b. 1969) is another Spanish based Cuban composer whose “Introducción y Guajira,” the second movement of his Work for Clarinet and String Quartet, was premiered by D’Rivera and Cimarrón. Ernesto Lecuona (1895-1963) was one of Cuba’s most well known composers and he is represented here by his spirited Cuban danza “Al Fin Te Vi.” Written by Cimarrón’s Rodríguez, “Zumolandia” is a fascinating composition with intricate string work carried out expertly by the ensemble. Clarinetist and composer José Urfé’s (1879-1957) “A La 1830” is a wonderful throwback danzón.

Legendary composer Coralia López’s “Isora Club” is a seductive piece that features some tremendous playing from all. Cana provides two additional pieces for the recording: the playful “La Rity” and the coy “Dona Vainilla,” featuring some sensitive soprano saxophone from D’Rivera. The program closes with a dramatic rendition of Lecuona’s “La Comparsa.”

Paquito D’Rivera’s collaboration with Quinteto Cimmarón was a special occasion for all involved. It provided a return to the musical roots of a cadre of Cubans with diverse musical leanings and a way to highlight Cuban composers, new and old, with the resulting recording Aires Tropicales left as a testament to their excellence.

Bandcamp Daily  your guide to the world of Bandcamp